The morphic effects are those that arise from a reduction of the symmetry of the system caused by the application of an external force, for example: an electric field or a magnetic field. The new system, the crystal + applied force correspondes to a new symmetry group (group-subgroup related) that leave the new system invariant.

Once it is known the point group of the initial system and the extended one (crystal + applied force) one can cancluate the correlation relations between the point groups and study their behaviour of the IR, Raman and Hyper-Raman modes.

Input of the program:

This program calculates the reduction of the symmetry when an electric field or a magnetic field is applied and the behaviour between the modes of the high and low symmetries. The information that one has to introduce is:

One can select directly the point group from the table, one can also select the space group.

The next page is where one have to select the field (electric or magnetic) and the direction in which is going to be applied. 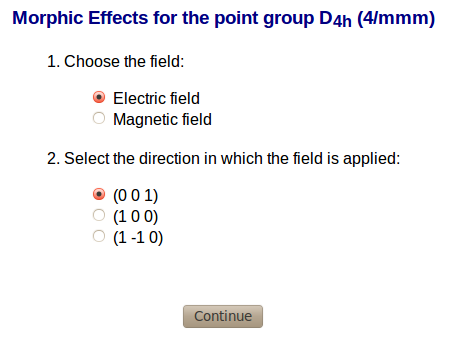 Output of the program:

The output of the program has three parts:

In this part of the output one can find which are the parameters one has introduced: the filed, the direction and the point group.

There is a direct link to the program POINT which gives us information about the initial point group (character tables, point subgroups, ...).


Here one can find which is the new point group of the crystal + applied field and the transformation matrix which relates the initial whit the final point group.

There is another direct link to the program POINT which gives us information about the reduced point group (character tables, point subgroups, ...).


In the last part of the output one can find the correlation relations between the initial crystal and the extended one.